Roundup in Food – Fear Mongering or a Real Concern? 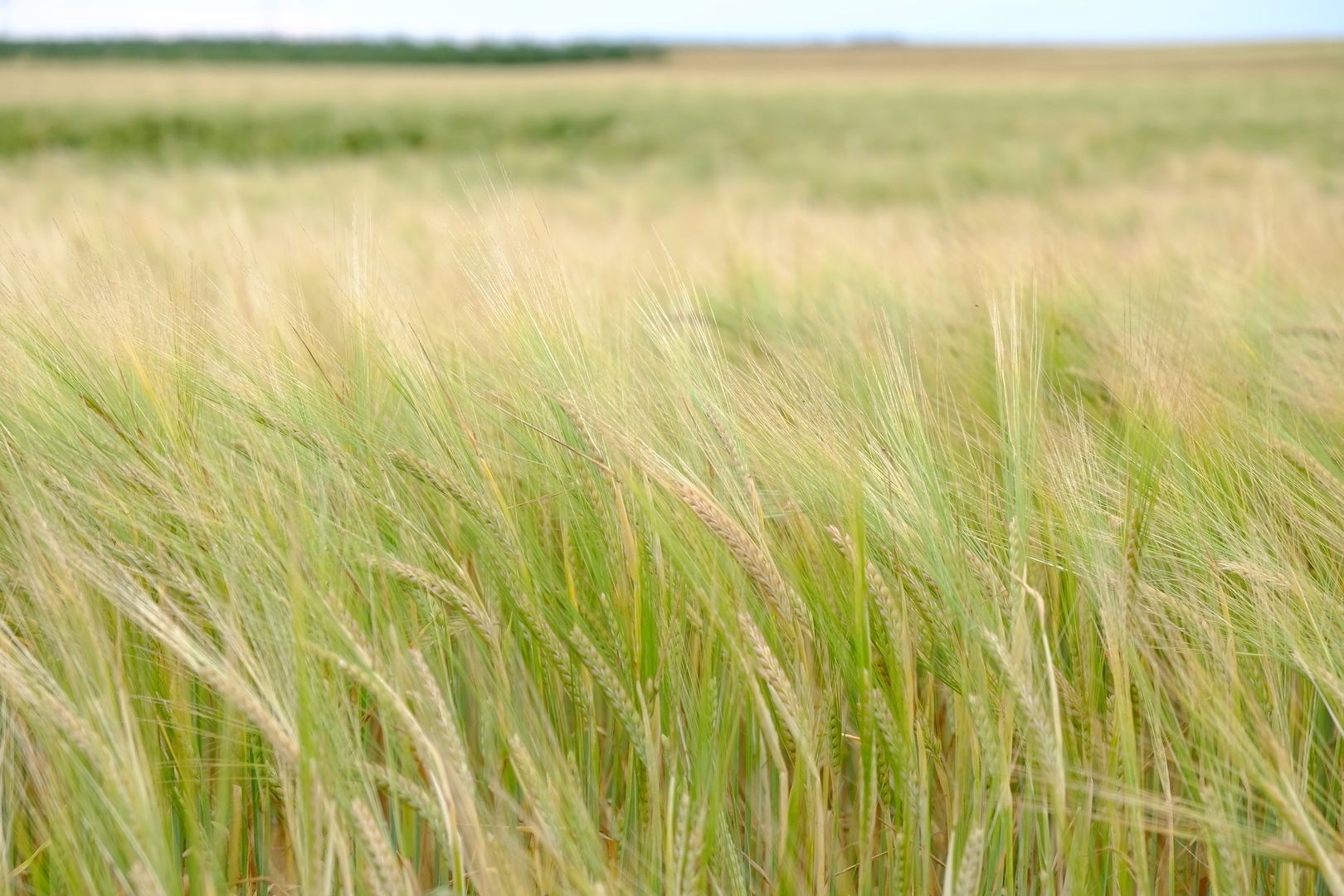 Monsanto’s Roundup has been in the news recently after a jury awarded a man $289 million for injuries he claimed were caused by using the herbicide Roundup during his job as a groundskeeper. De Wayne Johnson, the man that sued Monsanto, contracted a rare form of disfiguring Non-Hodgkin’s Lymphoma at age 42 after using the product for multiple years. A judge recently upheld the verdict, but reduced the award to $78 million.

The Environmental Working Group (EWG), recently released a series of tests showing detectable levels of glyphosate, the active ingredient in Roundup, in foods. They claim that the “safe” level of dietary exposure is less then .01mg per day. California’s proposed limit is almost 100 times more than the limit that the EWG says is safe. The FDA’s current limit is 70mg, 70 times the limit proposed by California! Who are we to believe? Is the Environmental Working Group fear mongering or should we have some real concern?

Monsanto and Roundup – A Brief History of a Blockbuster Herbicide

Monsanto the company doesn’t actually exist anymore.  Last year they were bought by the chemical company Bayer and have since taken on Bayer’s name. Monsanto was founded as a chemical manufacturer in St. Louis, MO in the early 1900’s. Their first products included artificial sweeteners and flavoring agents like vanillin, a synthetic form of vanilla, but their infamy began with their production of DDT and later Agent Orange for use during the Vietnam War. In the 1970’s Roundup (glyphosate) was developed. The next decade saw Monsanto start genetically modifying food crops with introduction into general farming use in the 1990’s.

Glyphosate use has climbed steadily over time since the introduction of GMO crops in the mid-1990s. 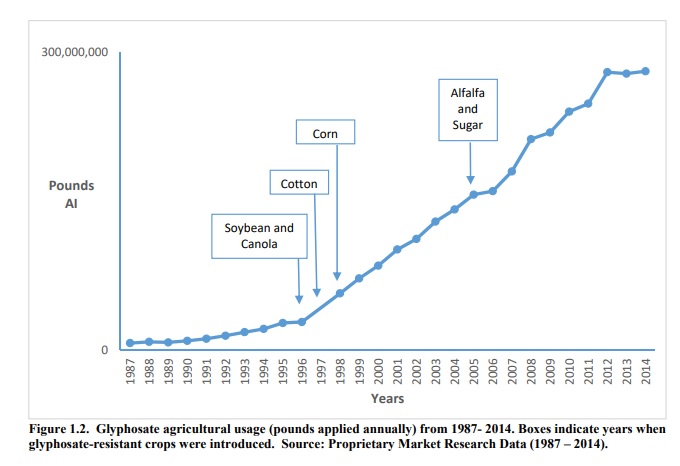 This graph shows a significant change in Roundup use happened with the introduction of Genetically Modified Crops (GMO). In 1995 around 40 million pounds of glyphosate was used across the US. By 2014 that had increased to 280-290 million pounds.

Glyphosate use in 1994 across the United States. 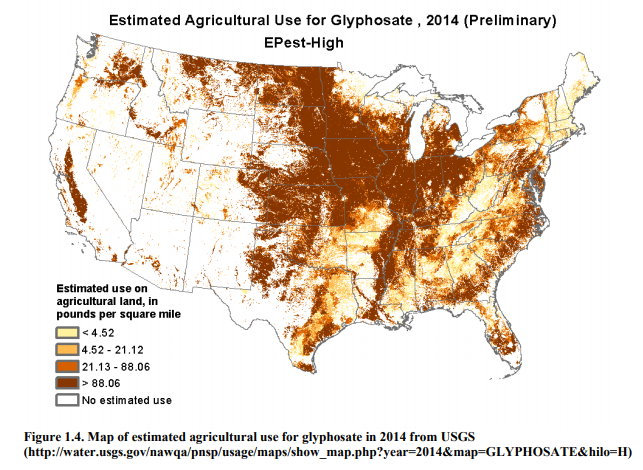 Glyphosate Use in 2014 across the United States.

It’s clear that chemical glyphosate, the active ingredient in Roundup, is being used much more in agriculture. The increase started in the mid 1990’s and has been happening ever since.

The next question is – Does that get into our food supply?

The Environmental Working Group (EWG) has put out two sets of articles this year where they show the results of its tests on different food products for glyphosate. They tested only oat-containing products such as granola, steel cut oats, and Lucky Charms cereal.

The full article and test results can be read here: https://www.ewg.org/childrenshealth/glyphosateincereal/

Four things stick out to me that are interesting:

To elaborate on point number four a little – I’ve looked into how the EWG tested for glyphosate in foods and the method is sound, it looks good. They used an independent lab, with a modern, very accurate testing method. It’s clear that glyphosate is in our foods, at least the foods that the AWG tested, in measurable amounts.

Does that matter though? Is glyphosate safe?

The conclusions from the EPA Review:

The conclusions from the IARC Review: 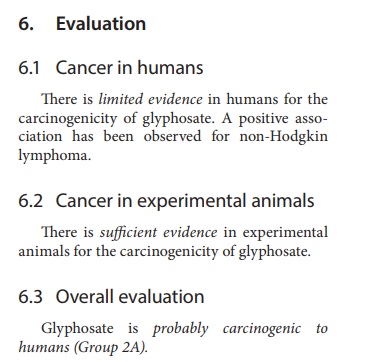 So what gives? We have the EPA classifying glyphosate as “not likely to be carcinogenic in humans” and the IARC concluding that glyphosate is “probably carcinogenic to humans”. The difference couldn’t be more stark, yet they both had the same studies to review.

The EPA has a requirement that if there are studies showing that a substance is carcinogenic, but that there are studies of equal quality that show that a substance isn’t harmful, then they have to classify the substance as “not likely to be carcinogenic in humans”. This is what happened with the association between Non-Hodgkin’s Lymphoma and glyphosate use. Some studies show there is a link, others don’t. The IARC on the other hand doesn’t have the same limiter.

I’ve looked at both reviews and my conclusion is that at high doses, those experienced by farmers, landscapers, or others that work with glyphosate/Roundup, it may be carcinogenic. The link is weak in the human studies for most cancers expect for lymphomas. There is a moderate to strong link to lymphomas in humans, although there are conflicting studies in this regard. Combined with the links on some of the animal studies, saying “may be carcinogenic at high doses” is the most fair conclusion.

On its own, the low doses of glyphosate in food,  seem to be safe, at least when it comes to causing cancer. However, when eating foods that are conventionally produced, it’s not just glyphosate that is on the food. Roundup is a mixture of glyphosate and other “proprietary chemicals”. The EWG testing only looked at glyphosate – it’s likely those other chemicals that are in Roundup, plus pesticide residues would be found too. A better question is, what is the total body burden of all these chemicals doing? This is a more difficult question to look at, but the evidence from the recent study of people that eat conventional vs. organic reveals that the total body burden of the low levels of pesticide and herbicides that are in conventionally raised foods likely increases cancer risk by around 25%. So, on its own, the glyphosate in food isn’t going to cause cancer, but over time, along with its chemical friends that it travels with, it might.

I also want to note, that the main point of the IARC and the EPA reviews was looking at cancer risk. There are many other maladies that humans suffer from besides cancer – anxiety and depression, autoimmune disease, and Alzheimer’s disease to name a few.  There aren’t many studies addressing the impact of glyphosate on these diseases. The few studies that were done on these used extremely high doses, well beyond what one would get from their diet.

At the very least glyphosate is a pro-oxidant, meaning that at the low levels found in foods the antioxidant systems in your body will have to deal with it. If they don’t it will cause oxidation and inflammation.

Take home messages from my review:

This article was limited to looking at the safety of glyphosate/Roundup, specifically around cancer, and it’s prevalence in the food supply. There are other issues with glyphosate including it’s link with colony collapse disorder in bees, and it’s effects on the human microbiome, that one needs to be aware of. This is important when making choices around what foods to eat and farming practices to support.